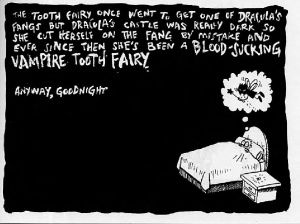 This went straight onto the toilet wall...

I was listening to someone talking to my (almost) step-daughter the other day, wondering at all of her missing teeth and asking about the Tooth Fairy. The TOOTH FAIRY! The supernatural creature who comes into your room at night, takes your teeth and leaves money in return. Now I have no problem with the concept of fairies (see the Money Fairy blog entry) but I can’t help but be disturbed by the concept of a creature that wants my child’s teeth. What does she/they do with them? Anybody who has read (or only seen – heathens) Terry Pratchett’s Hogfather has a pretty good idea. But maybe there’s a thriving economy in children’s teeth in fairy land. We all know what rhino horns are used for. We should maybe be glad that the fairies aren’t just coming and taking teeth by force! Or maybe we should be preparing against the inevitable Tooth Recession of 2012. Our kids do eat more sugar than is good for them, after all. 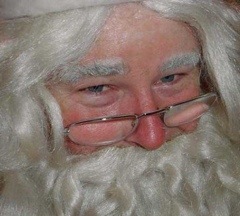 But that’s not my point (it’s just what’s going to keep me up at night for the next couple of weeks). We create these incredibly complex belief systems for children. Of course, children are wonderfully gullible. They’ll believe anything, and it is an endless source of amusement to me.

Definitely not a Smurf.

They won’t, however, believe that vegetables taste good. But they believe in Santa. They believe in the Tooth Fairy, the Easter Bunny, Smurfs and Pokémon. And we encourage this belief.

I’ve gone from child to parent with Christmas these past couple of years co-habiting with my soon-to-be step-daughter. It changes everything! I ate three mince pies before I was satisfied with the “santa bite mark” I left on the pie left behind for him. Oh, the sacrifice! And my reindeer dental print in the carrot had to be seen to be believed. For Easter one year I created massive bunny footprints on the carpet.

A point. I have one. Ah yes, my point being that to maintain these beliefs for our credulous offspring (or step-offspring, or random children on the street) we lie to them. Unashamedly and with delighted malice (or is that just me?).

“You must go to bed early tonight. And straight to sleep. If you wake up, Father Christmas might not deliver the presents!” Translation: “Will you PLEASE go to sleep so we can get the pressies under the tree before midnight? We know you’re going to be up at 5am.”

“It’s time to write a Christmas letter to Santa. Write down everything you want. He’ll choose one or two things that he knows you want most!” Translation: “I have no idea what a 7 year old wants for Christmas. And I need a loophole in case the child asks for something that’s sold out or costing a bajillion dollars.” 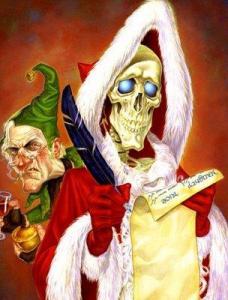 Why do we do it? Pratchett’s answer, again from Hogfather, is this:
“All right,” said Susan. “I’m not stupid. You’re saying humans need… fantasies to make life bearable.”

REALLY? AS IF IT WAS SOME KIND OF PINK PILL? NO. HUMANS NEED FANTASY TO BE HUMAN. TO BE THE PLACE WHERE THE FALLING ANGEL MEETS THE RISING APE.

YES. AS PRACTICE. YOU HAVE TO START OUT LEARNING TO BELIEVE THE LITTLE LIES.

“So we can believe the big ones?”

“They’re not the same at all!”

“Yes, but people have got to believe that, or what’s the point—”

Calvin’s dad would say, and I agree wholeheartedly, that it is just more fun to tell an imaginative lie than explain the boring truth. It’s a defence mechanism against the dreaded, all-powerful question “why?” Anybody who has ever dealt with a young child will know the question “why?” and the mind-melting implications of infinity it brings with it.

A far easier response goes as such: 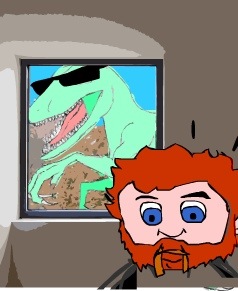 What if I wasn't lying?

“It’s time to go, Chad,” I say.
“Why?”
“Because a velociraptor has escaped from the dinosaur park and if we don’t get out of here soon, he’ll burst in through the door and eat you, one leg at a time!”
“Oh. OK.”

See? Much more fun. Only slightly more therapy needed as an adult.

My grandfather used to say the best way to find out whether a cat was a boy or a girl was to pick it up by the tail and swing it. If the eyes popped out, then it was a boy. He then offered to demonstrate on our cat Pepsi, who he well knew was a boy cat. It is one of the ways Perry men interact with children. Tease them until they completely lose it.

Lies-to-children is a term I first read in Terry Pratchett’s Science of Discworld (written with Ian Stewart and Jack Cohen. It describes the simplification of reality to help children understand the reality beneath. Things like “The Domino Effect started the Vietnam War” and “the sky is blue because of light refraction” are lies-to-children. Lies to Children are more along the lines of “the dog has gone to live on a farm where it will be happier.” or “if you have any more ice-cream it will leak out of your eyeballs and freeze your brain.”

I know which I prefer.

7 thoughts on “Lies to Children”