Archive for the tag “boredom”

Imagination and the post-y generation

Last night we went to see Tripod: Men of Substance. It was a vaguely depressing show, as the boys (men, now) addressed turning 40 and sixteen years of performing. Shereen thought it was hilarious. I looked at us, 16 years ago, drinking at the Prince Pat and watching Tripod doing Open Slather. Each of them had their own coloured shirts. It was fresh and funny and we’d drink too much and stagger home afterwards.

This show started at 8.45 and we were home by midnight. Sad sad sad.

I’ve always liked Tripod. They write for my generation and my type of person. There are references to Dungeons and Dragons, Star Wars and Commodore 64s. One of their songs last night was called “Waiting for the Game to Load” after putting the tape in, typing load and pressing play. Ah, the memories. 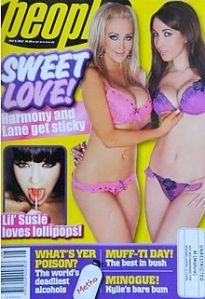 But still, getting access to it required a bit of effort and some ingenuity. And of course, you had to outsmart your parents in the hiding. A regular rotation shift of location and the occasional emergency ditching to a friend seemed to work.

I got really side-tracked here from where I was going in this post. What was I going to say?

Tripod’s other little gem was that boredom is the catalyst for imagination. My brother and I never got up in the morning thinking that today was the day that I would almost cut off his thumb. We would eat breakfast, sit around a bit, and then say “OK. I’m bored. What do you want to do?” And one of us would remember that there was a hatchet in the back shed, and a stack of wood that could be cut up. And of course, Justin would have to hold the wood still. And then there was the hospital trip and another experience arising out of boredom and imagination.

I’m not saying it right.

We would sit around, nothing better to do. And then Justin would point out that we could jump off the roof, onto the trampoline, and from there to the cushions and mattresses from the caravan. Mostly, he was right.

This is why I’m not in sales.

OK, last try. Dad would bring home a video camera. It was a massive thing, with a shoulder strap to hold the player, attached by a cord to the camera itself. We would spend hours creating film. We figured out how to do stop motion and would drive chairs around the backyard. We realized that if the camera was on a tripod (not a Tripod) we could do special effects, turning Elise into Dad and making people disappear. We would do David Attenborough specials through the wilderness of our backyard, and rope in our friends to create advertisements for made up soap and pet food. We let our imaginations run wild and rarely came back to earth.

I’m not even sure that teenagers today would get Calvin and Hobbes. “Is he playing some sort of a computer game?” “Is it something like Inception?”

Of course, there are still the precious few – those children and young adults who can live inside their minds and find the hidden worlds that exist all around the bored and the inquisitive. And imagination exhibits in other ways. The special effects that abound in today’s movies are incredible. And someone had to imagine that. Computer games are pushing the boundaries between interaction and storytelling, to great effect. Only two percent of novels are published, which means that for every novel on the bookshelves, there are … um, more (199?) that have been written, but not published, which is an amazing output of imagination. Imagination isn’t dead.

Kids who spend all of their time playing Clash of Clans. Kids who don’t know the meaning of boredom due to being given iPods at the age of four. Parents who turn on the tv or the computer or the console whenever a child says “I’m bored.”

These people are giving imagination a damn good thrashing. I’m sure our creativity is diminishing as a species. And what does that mean for humanity as a whole?

It’s the dreamers, the bored and the curious who have gotten us to where we are today. If nobody is allowed to be bored, they won’t dream, they won’t have a need to ask “What will happen if I mix these two…” BOOM.

And may the gods help us then.

PS. A side not that I couldn’t fit in anywhere else: Film studios need to get past remaking films from other countries and other decades, or adapting nostalgic television into nauseating and forgettable cinema.

PPS. Today was the bored. Next week will be the dreamers. Does that mean I now have to write a curious blog post about skinning cats?