Archive for the tag “cinema”

Every now and then something happens that just typifies the fears of humanity. The shooting in the last week during Dark Knight Rises contains all of the elements necessary to live forever in the public consciousness. But if James Holmes thinks he’ll be famous forever, he’s in for a rude shock. I had to look up his name to write this, and in a month from now, he’ll only be recognised by trivia buffs and criminology students.

As for the massacre, you couldn’t script it better, and from the sounds of it, this madman may just have done that.

Just shy of the location of the Columbine massacres, this just further fuels the fire of the gun debate.

2. Reference and using the mass media –

“I am the Joker” he says. Choosing Batman as his target allows for decades of quotes and sinister gadgets. And firing on a movie theatre – Going to the movies is a hyper-real situation at the best of times. You give up on reality for a couple of hours and experience extremes in emotion in a safe environment. IN A SAFE ENVIRONMENT. Interviews with people in the cinema said that at the beginning, patrons thought the whole thing was a publicity stunt.

3. The careful planning of premeditation –

This guy had spent weeks in the preparation of the movie event of the year. He had legally acquired the guns and ammunition that he used. He had a gun license. He rigged his house with bombs so that anybody coming to investigate would be killed as well. He rigged a music system to start blaring at about the same time he hit the cinema, hoping that someone would open the door to turn off the music. He had tear gas bombs to stop people from escaping. It was a comic book plan created in real life.

4. The condemnation of his mother –

“I knew it was him.” His mother was waiting for the phone call saying that he was the murderer when she heard about the event. Nobody was surprised that he had done this.

The horror just came out, episode after episode, comic issue after issue, every time we looked at the newspaper or on the web. The condemnation was universal and Nolan and co. were the first to put out official statements. Nolan would be nervous as hell! When I type Dark Knight into Google, the first entry is show times for Melbourne. The second is a list of articles on the shooting. A link to the first article I picked. 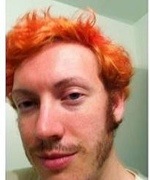 James Holmes – dark hair dyed flame-red – will live on in the memories of bad movies, sick jokes and documentaries on gun control. But who will remember him outside “that guy who shot up a cinema”? And apparently, everyone with the name James Holmes – they are being victimised on Facebook and Twitter.

What disturbed me was the number of kids in the audience. And that’s not because they got killed. Nolan’s Batman is not for kids!

Oh, and the other reports attached to the first article:

I wouldn’t have added it, but for the McDonalds article.