Archive for the tag “relationships” 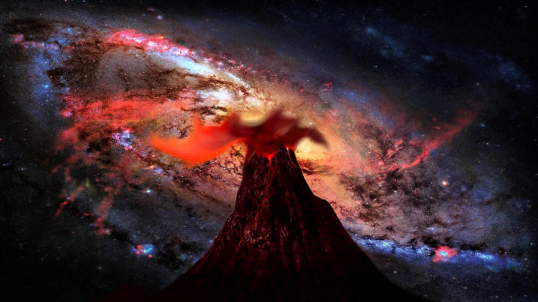 My wife and I were having a lazy Sunday, lying in bed and chatting with each other, when she took my hand and concentrated.

“I just had a vision of what’s inside your mind,” she said. “I saw a huge volcano and surrounding it was the entire galaxy.”

This is my mindscape. No compartments, no little boxes, just the entire galaxy and the huge fiery volcano at the centre.

One of my goals has been to try and still my mind a little. Let the waters stop churning and the ripples cease. But when I sit still, thousands of ideas run through my brain; a new story idea, a snippet of a play that would look fantastic on stage, 3D models I want to bring to life and marketing ideas for Dwarves in Space. My mind doesn’t slow to that still point that apparently exists in some people.

The volcano in my mind is a deep rage that I try to keep in check. It is also the fire of creation, adding to the galaxy outside.

I wanted to try something.

“You held my right hand,” I said. “That’s not my dominant hand. That’s not the centre of me.” So she took my left hand in mine and I concentrated with all my mind on a forest – tall trees, peaceful and still. At the centre of that forest was a writing desk, where I could write in peace and quiet.

“Ok,” she said. “It’s spreading now. The volcano is still there, but now I can see more. There is mist and a giant forest at the base of the volcano.”

The transfer of energies is a concept that I can quite easily get on board with. There is a heat that you feel when someone touches you. Energy transfer is simple science. I am fully willing to stretch that transfer to a type of mental energy, or spiritual energy that transfers as well. You can tell when you touch someone that doesn’t like you or doesn’t want to be touched, if you are in any way tuned in.

I find it hard to say “I don’t believe in that” about anything. You can’t just dismiss something because your world view doesn’t fit the ideas that someone else takes on board. Well, you can, but you shouldn’t. I wouldn’t stay home from work because my horoscope said that I was going to have a bad day, but I didn’t get my motorcycle license because a psychic told me the day before my test that if I got on a motorcycle I would die.

I have that tape somewhere. I’ll upload it when I’ve got a spare hour or two to cut it together.

Shereen told me more about my inner world.

“I wandered in the forest and found a glowing figure standing there. Not scary, not mean, just suggesting that I shouldn’t be there and could I please leave. I could tell by its features that it was you, or an aspect of you. And then I was pulled backwards, lifted out of that space.”

“And finally, I found a room. A room made of clay, and inside it were a group of figures – the Mystics from the Dark Crystal. They were trapped inside the room, talking quietly to each other, but not allowed out. And when I saw them, they started to fade into the walls, disappearing into the clay. One of them had piercing blue eyes, which is how I knew that they were aspects of you as well. They were elements that weren’t ready to come out now.” 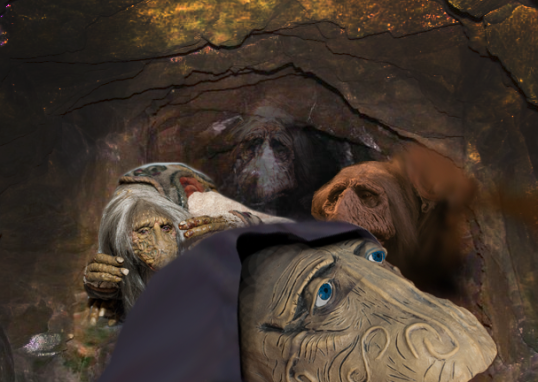 I know there’s a lot going on inside my head. It’s good in some ways, as it means that I’m never short of a creative outlet. But sometimes I miss the stillness that I know other people can find. I am also deathly afraid of what I might find if I let the Mystics out of the box, the glowing figure out of the forest. Even the thought of being that still makes my heart seize up. I don’t want to be self-reflective. I DO want to be self-reflective.

But how do you reflect on the whole galaxy at once?