Archive for the tag “rory”

Every time someone brings up time travel, someone mentions killing Hitler.

“If you could go back in time and kill Hitler as a baby, would you?”

It’s either kill him as a baby or kill him as an adult. As a baby he hasn’t done anything wrong yet. Plus, killing babies is less than savoury for most people (whereas killing adults seems to be totally fine). As an adult, he may have already done too much damage to stop by just removing him from the equation.

To properly answer the question, you first need a Year 9 Humanities class brief history of Adolf. Here are some excerpts from one of my students from last  year:

“Adolf Hitler was born from Klara Polzl and Alois Hitler on the 20th of April, 1889 in a small town in Austria named Braunau, and is most commonly known for being Germany’s leader during World War 2. Hitler was the fourth child Klara had given birth to, as the three before had died. Hitler had a younger sister named Paula. “

“Alois was a strict senior customs official who took beatings upon his wife and even his son. After Hitler read that the brave man gives no sign of being in pain, Hitler told his mother: “father hit me thirty-two times… and I did not cry”. Klara, Adolf’s mother, was a very kind woman who only wanted Adolf to succeed and do well in life, as she did not want to lose another child.”

“While Hitler disliked most of his teachers, he had one which he paid respect to, which was Leopold Potsch, his history teacher. Potsch, being a German Nationalist, taught Hitler and his pupils about Germany’s victory over France. Hitler was inspired by Potsch in the long run to be a Nationalist.”

“Throughout his life, he had consistent bad grades with the exception of his skill in art. When his entry to an art school was declined, he was shattered, and lived in Vienna pretending to be an art student trying to make his mother proud. While he lived in Vienna, he mostly walked parks, observed buildings, and visited libraries. In the summer of 1909, Hitler lived on the streets.”

Caught up? Good. By 1925 it was pretty much too late. He’d written Mein Kampf, been to prison and had a following of people that would probably have continued with the reich even if Hitler was out of the picture.

So any killing of Hitler needs to be done before then, probably around 1909 when he was living on the streets.

Bloodthirsty bastards! Why do we have to kill Hitler? Why bloody our own souls? Here’s an alternative that doesn’t come up very often: Be nice to Hitler.

Let me present you with a scenario: Someone is coming back to kill you from the future. In about five years’ time you will do something that will cause the death of billions of people. With the invention of time travel, all of this death can be avoided simply by killing you. Are you ok with that? Or would you like to see someone try an alternative option first? 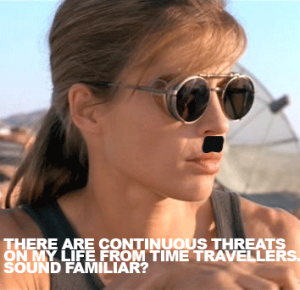 Hitler hated his teachers. He was bored at school. He was excluded from art college, he was beaten by his father. He was lazy but intelligent. He only had one testicle.

I can’t do anything about the last one, but as a time traveller, especially if we can travel about willy-nilly to do what we want, we could negate a number of bad influences in his life, making him, if not a good person, at least one who is politically ambivalent, not disposed to prejudices towards certain races and safe out of the way in an artist’s colony somewhere.

If I wanted to go further, I’d be talking to the leaders of France and England and suggesting that if they don’t want a second world war, they should go a bit easier on the country they just defeated. If they hadn’t been so heavy-handed in their sanctions, German Nationalism wouldn’t have received so much support from the general populous.

Of course, maybe people have been trying this for decades. Changing time and each time getting someone worse, until last time, when the time traveller stopped the evil dictator Gordon Champott, who had destroyed most of the civilised world from his seat in England, and when he got back, found that Hitler had risen to power in his stead.

And maybe a world war at this point in time, before the rise of nuclear weapons, was better for the planet as a whole.

But seriously, if someone gives you a time machine, just think about your actions before you go and murder someone, just to see what happens.

I would be incredibly irresponsible in this.