I stood on the bridge overlooking the creek in Halls Gap and watched as my cap floated away in the water, gone forever. I could just see, written in black permanent marker on the peak, the letters CE surrounded in a heart. Cap and love heart sank beneath the rushing waters. Gotta love a metaphor.

It was 1985. I was 11 years old. The loss of that cap was one of the most devastating things that happened to me that year. That and the loss of the girl that went along with the letters CE.

People who pooh pooh the love that we feel in those pre-teen years just don’t remember what it was like. That first obsession is everything. Nothing is safe from the permanent marker, the love heart, the initials. Tree trunks, books, clothing, desks, all tattooed with the symbol of young love, usually unrequited.

CE wasn’t my first love. My first love was KK, back in Grade Two, in Heathcote. That was a tragic story. Kathryn was in the grade above me. Pretty and blonde, she let me catch her in kiss chasey and the romance blossomed from there. But it was a romance doomed to fail. We were separated when Mum and Dad took the family to Queensland on a six-week holiday. I don’t know whether she pined for me, but I managed a few illicit holiday romances up north. 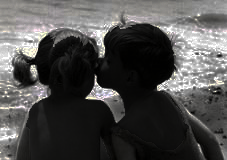 I remember a curly-headed blonde somewhere around Noosa, who was more interested in kissing than conversation. That was fine by me, although after a couple of days I was a bit tired of it.

When I returned, we tried to continue on the way we were, but something had changed. We both knew it was over, but kept it going for the sake of appearances. We had my father as a teacher that year. He had us create poetry. Hers went something along the lines of:

Kathryn had a little lamb
Damian was its name
And everywhere that Kathryn went
Lambie also came.

Obviously, I was incensed! How could she humiliate me thus! I chased her around the room, trying to get the poem back before she handed it to my father. I got hold of the paper, it ripped. The tearing of the poem mirrored the rending of our little love affair. I don’t even remember speaking to her for the rest of the year.

So, maybe that wasn’t exactly love. It was more involved than my first girlfriend; I met her in kindergarten. I want to say Cindy, but I’m sure Mum has a better idea than I do. Another blonde. My tastes changed. We walked to kinder together, along with our mothers – excellent chaperones. One day, on the way to kinder, we were pretending to be cats. A little bit overzealous, I hissed and swatted Cindy with my claws out, leaving a decent scratch across her cheek. She didn’t forgive me for that, and the relationship was over.

I’m pretty sure that wasn’t love.

But CE, that was love. Unrequited, from start to finish. Starting in Grade 5, I still carried a torch for her in Year 8, but by then we were living in different worlds and didn’t meet very often. By then she’d become an ideal, and when I caught up with her at the Ky Show in 1988 and asked her out, I wasn’t overly worried by the rejection.

CE was beautiful. Her hair was long and brown; her eyes always carried a smile. She had a smattering of freckles across her cheeks and she had a fresh, lively personality. CE played tennis, which showed in her athletic figure. I was smitten from the first time I met her and loved her with a purity only matched by one other person in my life.

Once you hit puberty, even the truest love has an undercurrent of desire. CE was never sullied in my mind by impure thoughts. But she did break my heart, a betrayal that I never quite forgave her for, even while I continued to love her.

She was in my class. I was trying to build up the courage to ask her to go out with me. We were friendly. She melted me with her smile and the focus she gave me when she said hi in the mornings. I have no idea how I responded. I can’t imagine it was overly suave. I worked through my plan with Matt. I’d go in, have Matt distract her friend so that I could get her alone. I’d ask her to be my girlfriend (and what a mammoth undertaking that was at the age of ten!) and I would marry her shortly afterwards, our lives twining together into eternal bliss.

I came into the class early. Matt grabbed her friend with some pretence, I walked straight up to her and asked her out –

“Oh, Damian, I’m sorry. Tim asked me out just a few minutes ago. He’s my boyfriend now!” And, just to stick the jagged knife into my heart: “But, if you’d asked me first I’d have said yes.”

Tim. My nemesis! A loud, boisterous child, more active than intelligent and obviously just a little quicker off the mark. It turns out he wasn’t even really interested in her. He just knew that I wanted to go out with her, so he got in first because he could. Handsome, smarmy, pre-teen git.

And so CE was lost to me forever. I loved her still, but I couldn’t go out with her after she’d been out with Tim. I pined for the rest of the year. Well, obviously I didn’t pine for the entire year. But I kept her on a pedestal, my beautiful CE, with her only flaw being her terrible judgement of character.

I’m pretty sure I didn’t look at the cap floating down the river and think “well, that’s indicative!” but it stuck with me as an image. That heart, scribbled onto my cap with the initials within is burned into my memory.

PS. The adult me is damned ecstatic that the stupid cap floated away. I must have looked like a complete dill wearing a navy blue cap, covered in graffiti. How could my parents allow me to continue to wear it?

PPS. My other pure love lasted from 1986 until, well, let us say well into the new millennium. It took me seven years to ask her out and that rejection put me under for a week. I loved her, I desired her, I lost her and then I found my best friend. She has been my best friend ever since, and means as much to me as family.