I’ve got the theme song going through my head right now. And now you do too. Ha! Ear worm.

My lovely wife and I went to a wedding on the weekend. As I get older and more introverted, I find myself dreading weddings. You know the deal: turn up, hang about near the church making small talk, sit through a ceremony, hang around for ages until the reception and hope to God that you’ve been placed on a table with either someone you know or someone interesting.

This wedding was an absolute delight. The bride and bride were lovely, the rain miraculously held off for the outdoor ceremony. And we were there with a bunch of people who were incredibly easy and fun to chat with. These were friends of Shereen’s, through our daughter’s last school, so she doesn’t see them as often as she used to, and I rarely see them at all. But the conversation was easy and stimulating. We laughed a lot and chatted over a number of different topics.

Which is lovely, but not my point (when is my opening ramble ever on topic?).

Shereen met these people because her daughter went to the same school as their kids.

Now, there’s a bit of a cultural crossover here, in that they lived in a similar area and sent their kids to the same school, so they would have some common interests and values. And of course, Shereen isn’t friends with all of the parents at the school, so that limits it even further. But I found it interesting that they became and remained friends through that limited commonality.

And that probably says more about me than anything else.

I have those that I met through family as a child. A few from high school. A few more from my first university degree. Some from my second stint at Latrobe. A small select group that I met through other friends. A tiny smidge of people that I am friends with because of my jobs. Oh, and some Pratchett people.

That’s actually not a bad number, once I go through it in my head.

I think I have eight people who would help me bury a body. One of those is my wife, and she’s only up for it under certain circumstances. One isn’t as good a friend but would just be up for burying a body. That leaves six friends in the body burying category. Of those, two wouldn’t judge and the other six might need a bit more explanation. 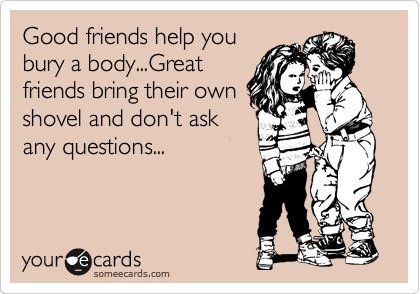 I’m not counting family here, because being family means being willing to drive out into the forest and bury a body. You can choose your friends, but you can’t choose your psychopathic relatives.

Why are we friends? What happened that meant that we got to a point where I could show up in the middle of the night with a canvas wrap and a shovel? It’s not just because they like Red Dwarf and Star Trek. It can’t be just that we’ve spent x amount of time stuck in the same place together. I’m pretty sure it’s not just teachers and computer programmers.

I think that there are certain shared experiences that just cement a friendship.

Burning a Chucky doll is one of those. I have an event on Facebook at the moment for a reunion of The Five. 20 years ago, we sacrificed a Chucky to relieve exam stress and to save one of the Five from nightmares. This is a post in its own right. I can’t believe I haven’t done that one yet. Stay tuned. Anyway, we were all close friends before that point, but even if we hadn’t been, I’m pretty sure we would have cemented the friendship with that experience.

My friend Melanie is such a good friend because we were born within months of each other and then spent the next 20 years with our parents getting together regularly. Somewhere along the line we found a friendship that I didn’t maintain with the other two in our little ’74 babies club. We played tennis at New Years and Easter for decades. Her sister almost drowned me in their pool.

I think the intensity of university was the catalyst for a lot of friendships. You’re over 18, living out of home, pressured by the new life and all of the work you have to do. You have no idea what you want to do once you’re done, or you know exactly what you want to do and you’re not sure you’re going to manage it with the marks you’re getting. You’re trying all the new things and all of these people are trying them with you.

And 20 years later, most of them are still around and close friends and checking the Crimestoppers website for new information and hopefully not looking too hard at the reward section.

Who would help you bury a body? Hold on to them. It’s not as common a friendship trait as you might think.